I added more color in my hair at the end of July.  The green will fade fairly fast (which is okay) but we are working up to a fallish color with colors through out but not all the way down the hair shaft. 😉  I love it. Next time, we’ll just spruce it up. Little Cutie got hers trimmed up and styled.  She is spoiled there as Melissa lets her sit under the dryer  and gives her a blanket to keep warm (the salon is perfect for me but cold to LC).  She gets a sucker too.  She just curls up and relaxes. 😉

This has been the worst summer (financially) for me with tutoring.  As, I mentioned before, I think people are just excited about being out with grandparents, vacations, camps, etc.  But I have been able to get the kids bathed earlier on some days and I’m loving that.  Also, we have had friends help us out.  I have a friend who picks me up for karate (b/c it’s ultra hot and we have no AC in our car).  We learned today that it would cost 700 dollars to fix the car up so we are driving it as is. Sigh.  Also friends came and helped us with our yard yesterday b/c we’ve put about $300 into the mower and it still won’t start.  We have a couple of new things to try.  Below you see Tbear with a spaghetti face.  I totally undress him when we have spaghetti. LOL.  Hence the happiness of bathing early. 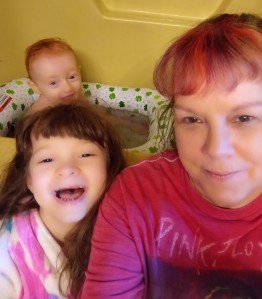 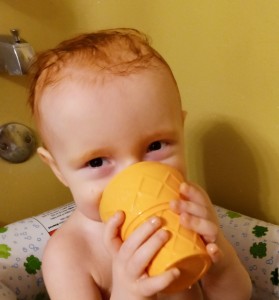 I’ve enjoyed having a tad more free time with the kids but still have been very busy.  Stephen and I got to go off for a couple of days for our anniversary (39th).  This, too, thanks to friends giving us a gift.  I didn’t realize how stressed I was or how much I needed to be away until we were actually there.  We just hung out a lot, got to go eat out a couple of times and just enjoyed sitting on the porch listening to the rain.  I did tease Stephen b/c he looked at our ticket after eating out and said: They didn’t even ask and gave me a Senior Citizen Discount.  Me: Did they give me one?  Him: No. Me: 🙂 ❤  He and I laughed the longest about it as he’s only 6 months older than me.  It was too funny.  And, we were grateful for the discount. 😉

Our neighbor shot off fireworks on the 4th.  Little Cutie and I enjoyed the show.  Tbear was scared inside b/c of the noise.  It was a pretty impressive show and since we don’t go out any longer to see the shows (too hot and too much pain waiting for the show to start), it was a good time for both of us.

To be honest, I can’t remember all that’s happened since my last update.  It’s been a financially difficult summer with so many kids heading off to camps/vaca/grandparents so tutoring has not been as financially rewarding as in the past.

The AC in our car doesn’t work so we are supposedly on a list to get it looked at. It’s been in the 90’s with a heat index way in the 100’s.  A friend has been coming out of her way to pick me and Little Cutie up for karate. I’m really grateful.  I’ve been helping her with katas, etc so she can test for 4th dan Black Belt soon.

I have had movie night with Little Cutie where we watched a movie we recorded.  Stephen and I took her to the theater once as well.   Little Cutie had a friend over  for a day visit where they helped me make cookies, I painted their nails and they played for hours. Later, she came for an overnight visit.  T is deaf and wears cochlear implants.  She taught me a few new signs. LOL Some are her own personal signs so…yeah.  They had a blast, chalked up our driveway, and T started calling me “Gigi” too. 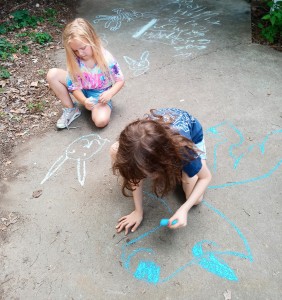 Tbear turned two and is yakking away. LOL 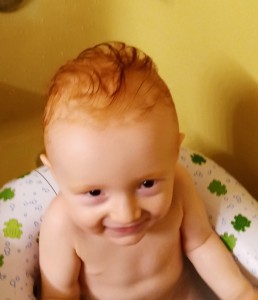 Friends came and replaced our toilet and a couple of faucets as well as gave us money to go on an anniversary weekend (#39 coming up in a couple of weeks).  We are excited about time alone. 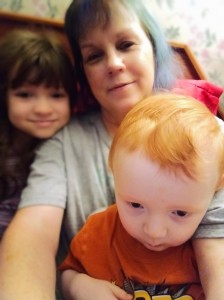 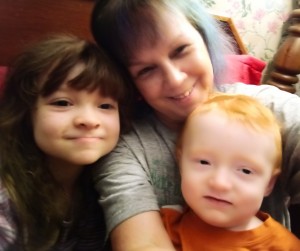 We go outside some but never stay overly long b/c of the heat.  We don’t have central air either so we have AC window units in some rooms.  We are never overly cool anyway.  The kids sometimes get ultra dirty but that’s part of the fun. 😉 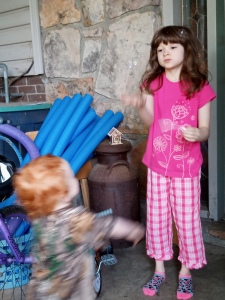 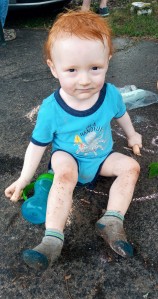 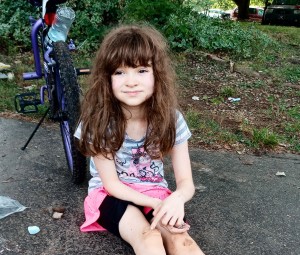 Really, I think that’s the main things going on.  I did get great photos (point and shoot camera) of the super moon but haven’t had a chance to put them on my computer yet. 😉

I will finish catching up with y’all later this weekend, hopefully. 😉

Little Cutie tested and earned her purple belt.  This is the second belt in the Intermediate level.  Really proud of her.  In the last photo, she is with our hearing impaired student.  Her mom takes and is totally deaf.  I know some sign language from a previous church having a deaf ministry….enough to communicate. 😉   However, I’m hoping to learn more…especially understanding it. 🙂

I got some pretty good photos of the lunar eclipse a few weeks back,  considering they are taken with my point and shoot camera Stephen got me for Christmas. 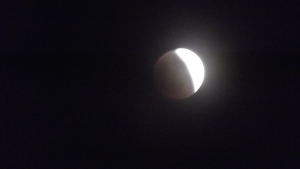 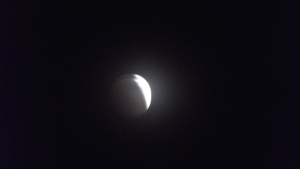 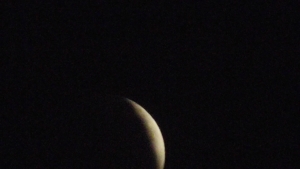 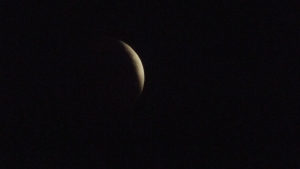 I try to keep the birds fed. Photos are taken from inside (from the school/tutoring room). Got a few good shots of the Dogwood and the flowers.

I also go a decent shot of Jupiter and Mars Conjunction.  😉 I stood at the end of our driveway, in awe of Father God’s handiwork.  I mean, I’m standing on the only inhabitable planet, looking up and seeing three more planets…Jupiter and Mars and (no photo) but Venus was off to the left, lower down. Amazing to me.

Trying to get caught up for summer students.  All my students stayed for summer except one and his sister takes two hours to save a place for him for fall. My student taking every other Monday (due to my Black Belt Class) is taking twice a week and I’ll lower one of my upcoming 7th graders to one hour (instead of two he’s been doing) when he returns from his dad’s.  I also have three new students getting a free evaluation this week, then they start next week.  So yeah, busy, busy.  Later, y’all.

I got the results for the AS Awareness Poster Contest Winners.  They are below.  Little Cute won first place ($30 visa card) in children’s category.

Stephen’s surgery was postponed because his blood sugar was too high.  We were big time disappointed.  But that needs to be under control and hopefully showed him how important it is. Hoping it’ll be rescheduled in a couple of weeks.

I got my hair touched up…same colors just touched up so no photos. But I love it.

Due to Stephen mentioning it, Little Cutie’s parents gave me a teacher appreciation gift.  Stephen always made sure the boys celebrated Teacher Appreciation Week when I was home schooling them.  Gift card to Ulta and some yogurt covered pretzels..which I love.

I’m not sleeping well and am exhausted.  I’m also continually having an issue with sinuses and coughing due to weather changes.  It’s crazy.

Summer schedule for tutoring is about done. I’m happy with it and have several new students.  Hopefully, it’ll work out.  Stephen’s birthday is next week so I’m taking him to see a movie (which we rarely get to do) and out to eat.  As a gift, I’m putting back money for him to spend at a concert the “boys” are taking him to in August (a Christmas gift from the all).  If he doesn’t have the surgery fairly soon, he won’t be able to go.  We’re already going to have to reschedule our trip…again. Sigh

Little Cutie and Stephen have camped out a couple of times.  They had fun.  I had an issue with LC’s mom and her not working out my Sat. off.  She was accusatory and (what we call in the South) ugly in her messages, so I just stopped texting and I haven’t really spoken to her since. I refuse to take Tbear this week to give them a break.  They truly don’t need one but need to step up and parent. Just saying.

I’m sure there’s stuff I’ve left out, but to be honest, I’m just exhausted.  I need a for real rest and decent sleep.  I’m hoping the pain level will ease off and I’ll be able to sleep better.  I also think I’ve caught up with all of you.  Later gators. 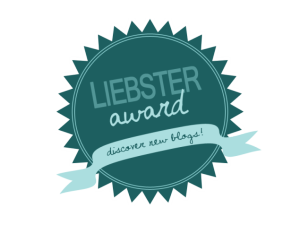